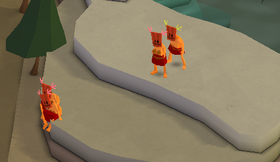 Four Astari watching a village from a nearby mountain

On the other side of your homeworld are the Astari people. They are wild party people who wear big masks on their face.

They will often show up in your part of the world and make fun of your followers.

After Festivals occur in the Astari village their Happiness is compared to yours, if you have a lower happiness than the Astari some of your followers will convert to the Astari and join their village.

If however, your happiness is higher than the Astari at the end of a festival some of the Astari will convert to you and become your followers. 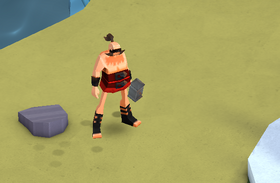 Champions will wander around in a small circle

Champions are large giant-like creatures that exist in the lands where your followers visit on Voyages.

They are able to kill your followers if they get too close by swinging their large hammer onto the ground, killing all followers within the shock wave radius.

Champions can be temporarily stunned by the Finger of God god power, or they can be killed with the Meteor Strike god power.

You cannot sculpt underneath or on top of Champions, as to not exploit drowning the champions in water to make an easier path for your followers.