The players' Influence is the amount of territory of a world whereof the player can achieve total control over. Expansion of one's Influence is a crucial aspect in Godus that is needed to unlock other lands, to acquire new cards, and to advance civilization faster.

To increase the player's Influence, one must first find a Beacon of Expansion. After finding one, the player must send builders to fix it (Maximum builder slots in Homeland: 8

). After it is fixed, the builders will burn it down (in the same fashion that biblical people burned sacrifices to worship their God), and the the influence of the player is then increased. The player must first select the card that appears on top of the beacon to claim the expansion of their territory before being able to perform any actions within it.

To make it harder for players to increase their influence, Beacon of Expansions are usually put on High places, or surrounded by swamps or granite. From the fourth beacon in the game and onward, builders will the need ore

to fix and burn the beacon, and the fact that ores takes three times longer to be ready than wheat

means it will take more time to accomplish. 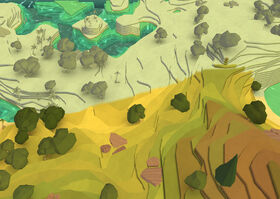 A border between territory under influence and territory outside it

In Godus, the whole world is already presented to the player - but that does not mean their influence has already reached that area. Gray areas in the world are the parts of the world where one's influence has not gone yet and, conversely, colorful areas are those only of your influence. Astariville is one exception; even though it is colorful, the surrounding area is gray and thus, it is not yet under the player's complete influence.

God powers and other abilities can only be performed within colorful areas (Including Land Sculpting and follower settlement.) Hence, until influence has been spread upon an area, you cannot interact on grayed areas of the world. Some actions may also be performed in Astariville.