The Pit of Doom is a PC exclusive monument that allows you to sacrifice your followers for gems. This pit is replaced by a temple in the iOS version of the game. The Pit also decreases happiness when followers are sacrificed. It is found at the start of the game after expanding for the first time however, it can only be used once the player has unlocked leashing. The Pit takes 1 Minute and 40 Seconds to repair. 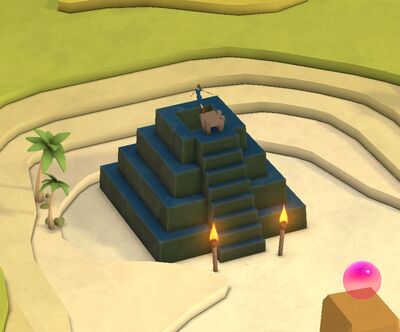 Followers and the Pit[]

Once a follower has been leashed to enter the pit, torches in front of the pit will light up. Upon reaching the foot of the pit the followers shoulders noticeably slump and he will proceed to climb to the top, throwing himself in without pause. There is a comical "Argh" as the follower falls, a light shines out of the pit followed by a smoke ring. The player receives a minimum of 1 gem.

In the in-game commentary Peter Molyneux hints towards there being different rewards from sacrificing irregular followers. Sacrificing Builders, Breeders, Farmers and Miners will give 1-5 gems, often 1 gem only, there has been no occurrences of other rewards, as of yet.

There is a hard limit on how low the followers happiness can come, so a legitimate strategy is to work in periods of no happiness and full happiness. Leashing followers to The Pit of Doom spends Belief, but buying, even the smallest pack of; Belief with Gems gives more than what is spend on leashing the sacrifices.

To avoid losing followers to the Astari tribe, simply spend some Belief on Swamps at their festival. This will kill their followers when they do their next festival and bring down their happiness to the same level as yours resulting in them not converting any followers.

To have access to as many sacrificial followers as possible, you should avoid settlements in the vicinity and build from the smallest plots only. Remember to use the Shrine of Capacity to increase the followers occupying each abode. Alternatively, if you do choose to place a settlement near the Pit of Doom, a way to get a lot of followers to it is to use gems to purchase a Fountain or Tree of Joy and activate the celebration. Breeders (and farmers/miners) will flock to it from nearby settlements/abodes, making them easy to leash to the pit.

Followers can currently get stuck in front of the pit when followers pathing hits the same spot from different angles, if this occurs, you can click and hold on one of the followers who are stuck to remove your leashed path and untangle them.